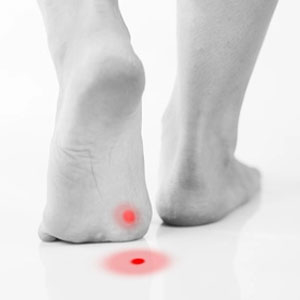 Simple Warts most often occur on the hands and feet but may also occur on other parts of the body. Warts on the soles of the feet and also known as Verrucae.

Warts are caused by the ‘human papilloma virus’ (HPV). HPV is better known for types 16 & 18 that may cause cervical cancer. Types 4 & 11 may cause genital warts. HPV vaccine given to Queensland kids at school in year 8 covers these HPV types – and more.

Simple warts usually caused by HPV types 1,2,4, 60 & 63. These are not included in HPV vaccinations.

The virus enters the skin through tiny breaks in the skin surface. Moisture and maceration of the skin on the feet encourage infection with the wart virus. Warts are ‘caught’ by direct or indirect contact with HPV-infected skin scales that are found on surfaces such as the tiles around a swimming pool or changing rooms. It is not clear why some people get infected and others do not. The time between exposure to the virus and a wart developing (the incubation period) is thought to be 1-6 months.

The bottom line is that you can’t do much prevent yourself getting simple warts.

Why do they matter?

Why does Warts matter?

Treating a Wart Yourself

Most warts eventually disappear on their own. A study in kids showed that two thirds went within two years without treatment.

A reasonable home treatment is with one of the commercial preparations that contain salicylic acid which is a chemical that helps remove the hard outer layer of the wart. Wart-off ® paint is an example. Treatment should be used every night as follows:

Remember that the point of the exercise is to get rid of the wart without causing you or your child any pain. Some warts are already tender, in which case you won’t be able to file down the wart at all. Kids are unlikely to put up with much of this treatment, and your child may only tolerate application of the product every couple of days. The treatment may make the wart sore, in which case it’s best to just leave it a few days.

Mosaic warts may respond to a gel containing formaldehyde. Verrucae that have clustered together are particularly hard to treat. Try soaking the whole area for 10 minutes daily in a diluted formaldehyde solution.

Why you might want your Warts Treated at a Clinic?

How can I help stop the a verruca from spreading?

Cryotherapy is the most common clinic treatment.

Cryotherapy involves freezing the wart with a 2mm margin of normal skin included in the treated area so as to kill the virus in and around the wart. A thick wart may be pared down before freezing. Cryotherapy is reasonably effective. However, more than one session is usually required to clear the wart. Treatment is performed at 2 to 3 week intervals.

The greater the freeze time, the more effective the treatment but with a greater risk of pain and blistering.

Side effects can include lightening or darkening of the skin in the treated area which may persist.

How about kids? Children will definitely not appreciate a deep freeze and may hate doctors for years to come! A light freeze may be performed but is probably not going to be effective. Whether you want the wart treated or not depends on the age of your child, their tolerance to potential pain and their attitude to the wart.

Medical grade topical therapy is also navailable. The application of the product is completely painless although any subsequent blistering may be uncomfortable. The treatment may need to be repeated

Who do we see at our clinic?

Let’s start with an important maxim –  you don’t have to treat a wart at all. The most common reasons for attendance at our clinic are any of:

Children do not tolerate intensive treatment although they do generally tolerate topical therapy. You should start with home therapies before considering further treatment.

What treatments do you offer?

Warts can be very challenging to treat, and every treatment has its pros and cons.

Treatment options at our clinic include:

Our Doctor at South East Skin Clinic is very experienced at treating warts with a variety of different treatment methods, including a combination of the above. However, you may require several visits, and success is not guaranteed.

Don’t believe the headline that says ‘simple effective wart treatment’ – there is no such thing.